My oldest daughter turned 8 recently, she is in the first year of Junior School and this seems to be representing a change in our world.  Some days, it’s a pretty dramatic change in our world, as the moods swing from high to low with the blink of an eye.  I can’t help but wonder what the puberty years will bring, if she is already so emotional …. time to build a shelter and take cover!  Gone are the cutesy stories about little children; we all love the little babies and preschool children, they are so adorable; strangers stop you in the street to admire them, we proudly show them off and laugh at their quirky behaviour, we swap stories about the funny things they say.  Then bang, cute turns into mini grown-ups overnight; people don’t see cute anymore, they see annoying children, they wish they had chosen the pub / restaurant that openly shuns the custom of children, they want the child free hotels, they want anything but your slightly older child running and screaming around the garden.

My current issue with the mini adult is make-up.  When is it OK to say yes to anything other than a face painted tiger?  Last week, there was the monumental tantrum of all tantrums, in public, following the refusal to buy a toddler’s piano book.  I remind you, she is 8, not 3!  Don’t worry I am not repressing her musical talent, she has since been placated with a piano app, so much kinder on the ears than the plinky plonky book version. Following this tantrum, in my weakened state, I said yes to the obligatory child’s make-up set and yes, it brought her out in a rash.  But before said rash, she spent 3 mornings happily sitting at her desk putting her makeup on, it was very sweet to see and made her so happy.  I had hoped that with back up from Dad, we might get it removed before she left the house, but he melted at the look of pride on her face, so off we went each day with our little princess in her eye shadow and blusher.  It was very subtly done, but she really could do with a few lessons on how to apply.  But by day 3, the rash was getting worse, so she decided that new special makeup must be purchased.  I should point out that none of her money has been wasted in this venture so far, and I am pretty certain she expects this new improved version to be funded by us too. So, what now for disappointed child, is it the real thing, at the same cost us poor adults have to pay?

I grew up in a time when both women and men wore heavy, obvious makeup (guess the era!).  I was in full foundation, the works, by 13 and have not stopped since.  As I struggle with this whole ageing thing, I can’t start the day without the application of full makeup, even the lure of extra time in bed can’t stop me needing my makeup fix.  I know I look more respectable to world with it, and other than a commando style run to the bin, I never leave the house without it.  This sends a rubbish message to my children; I am being a hypocrite saying they don’t need makeup and then plastering myself in it.  Apparently as I age, I should be wearing more age appropriate subtle makeup too, according to the experts…. Pah!  Plus, at a times when I could barely afford food, I still had to fund the makeup habit (is that the distant sound of violins I hear?!) It is not a cheap habit to get into. I am not keen on funding her new-found makeup fad, but will be sad if she feels she has to spend her valuable pocket money on it.  How do we keep this from spiralling into a need to be made up?  Will it eventually be that she feels more confident with it, than without it, or am I just getting way to ahead of myself? 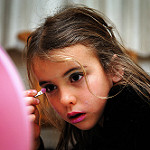 I don’t have the piercing issue as mine cant even cope with a paper cut, they have no desire to stick needles through their ears, or any other body part, I wonder if that will change.  So at least that is one battle I can leave for later years.  I’m not too worried on that front though, as long as it is done professionally, but is that because I know I don’t have to worry yet?  But makeup is here and it’s now.  Dad, being from quite an old fashioned, ‘traditional’ family, thinks this one is down to me.  I want them to be free to experiment and grow as their own people, but it is such a fine line between experimenting for fun and the pressure to look amazing, #nofilters!  All that said, I am about to go out and buy blusher, for fear of her skin if she uses the kid’s version again.  Luckily the lipsticks were fake, so for now a bit of lip balm/gloss seems to be acceptable.  I will always encourage them to be their own people, I will be open about my need for makeup, along with my sadness that I feel this need.  I want them to make choices for themselves and no one else, not because of what they see and read about, but because it makes them happy.  I’m in for the long haul on this one, I see many discussions ahead. 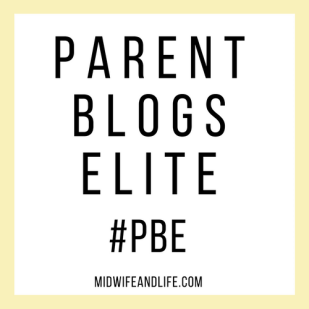 6 thoughts on “Growing Up – How Old Is Old Enough?”

This is a text widget, which allows you to add text or HTML to your sidebar. You can use them to display text, links, images, HTML, or a combination of these. Edit them in the Widget section of the Customizer.
Loading Comments...
%d bloggers like this: