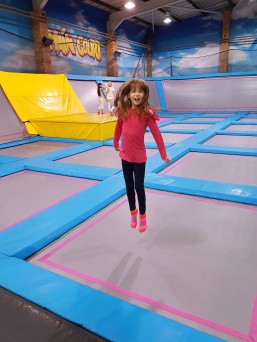 We recently had a birthday in the house; for our 8-year-old daughter.  We were really struggling with what to do for her party, or gathering, or friends round for tea; whatever you want to call it.  It’s not long since she joined the school, so there was the issue of do we mix the old school and new school friends, how many new friends does she actually have, will anybody come?  All the usual stresses of organising a child’s party, with a few added complications thrown in.  She had a Pizza Express party last year, which was fab, but we decided this year we didn’t want the cost of a full party.  I organised a make your own bear party for our youngest last year (it wasn’t the old favourite, high street option), you pre-order the cuddly delights and stuff them at home.  So, this was our home party option; I can fill you in on that one another time.  But it came to pretty much the same total as an ‘experience’ party; SO much more hassle though.  This time, the lure of someone else taking the strain was all too much to resist, so the hunt was on for the perfect party treat.

The birthday girl loves trampolining, so we decided to look into Air Hop, Gravity Force and Air Arena; these are our local Trampoline Parks.  When I say local though, we are still talking about a minimum of a 25-minute drive.  The distance brings into play the whole issue of whether we ask parents to drive all that way, or drive the party goers ourselves.  We decided on driving ourselves and the closest option was Air Hop in Guildford.  The Air Hop party option needed a minimum of 10 people, which meant either getting together a host of willing drivers, or hiring a mini bus.  It then transpired that she didn’t have 8 friends to invite.  We looked into the option of taking a small group of children and found a really good deal for Fridays after school.  We could book to jump, get a Slushie and a hot dog, all for the price of a regular jump.  (Add in the socks at a small charge, if you need them).  The timings were pretty flexible, so we booked in for a 5.00 jump with 6 children.  All we needed to do was get the names and dates of births from the parents, fill in our own disclaimer online, and we were good to go.  As is usual with girls, the guest list changed several times and increased to 8, including birthday girl and little sis.  Bit of a squash and a squeeze in the cars, but we got them there.  Adding in extra people to the booking was not a problem, and all was quickly confirmed by email.

The party option was going to cost £190, so we saved £86 by going for the after-school option, for the amount of people we wanted to take.

There is plenty of parking in the car park behind Air Hop in Guildford, and even the Friday afternoon traffic didn’t slow us down on our journey from Hampshire, as it out of town enough to avoid much of the traffic.  Check in was fast and simple; they were given either pink or blue socks, needless to say, they all chose pink.  Some had to get bigger sizes, but it was not a problem to switch socks.  They were given wrist bands and went off to watch a very quick video safety briefing; all a bit impersonal, but short and sweet, so it kept their attention.  We then had to wait at the gate for our exact time slot, before being let loose in the park.

Inside the park, there was a good selection of mini trampolines, (1 person per tramp, which was stressed on the safety briefing several times), a foam pit with 2 jump ramps, a dodgeball area, which was strictly monitored by an Air Hop team member, with just small numbers at a time.  Even my 2 dodgeball haters went in for a quick game.  They also had 2 basketball hoops; the only issue with these was that they were tucked away behind the dodgeball pitch and felt a little out of the action.  I don’t think it was fully booked for the session, so there was no issue with anyone getting a tramp space and just small queues for the foam pit, so they got a full hour of almost constant bouncing around.  It was not completely clear when we got the food, so I went up to the café and found that we could get it after the session; it was all very laid back and flexible. 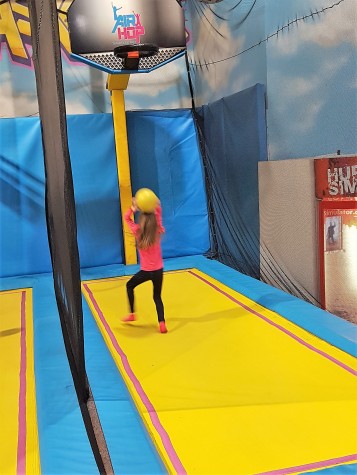 There were Air Hop team members milling around, but other than dodgeball, they did not engage with us, or the children at any time.   Which was not really an issue as the girls all seemed to know what they were doing.  My drama queen of a daughter hurt her back though, she was crying for quite some time and visibly distressed, so I thought at that point that some contact from the team would have been good.  She was OK though and eventually tentatively went back on to bounce towards the end of the session.  (Turns out that straining the lower back is a common trampoline complaint, its all about engaging the stomach muscles to protect the back, but try explaining that to a 7/8-year-old!)  The other girls had a brilliant time; smiles all round. 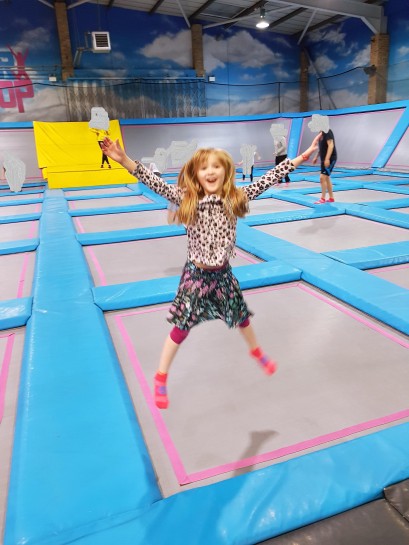 The food was a big hit in Air Hop; a very limited selection with hot dogs being the only hot option, but they were huge and really tasty.  Hot Dogs were from a hot dog heating machine, which, to be honest, I was a bit wary of, but even I was convinced to try a bite and they were good.  I had a few none hot dog fans, so they ate the bread and then chose ice creams as an alternative, which we did have to pay a little extra for.  The prices were reasonable though.  Lots of table spaces and all very clean and tidy, no queues for the food and they could not have been more helpful when we appeared looking for 8 slushies and 8 hotdogs.  There was no issue with us taking our own waters into the park, but no other food or drink was allowed. 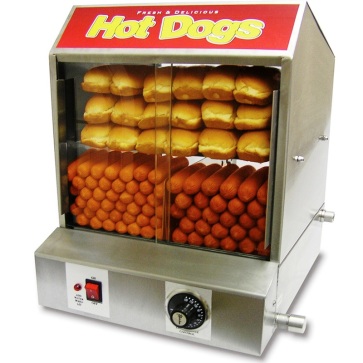 I am parent to an arm breaker; I sadly have accompanied her through 2 broken arms, so I am seriously over protective.  It was tough to let her loose in the trampoline park, knowing all the bad press, but as cotton wool and bubble wrap is not an actual option, I decided to go for it with a very watchful eye. There are plenty of staff around to keep a check on the jumpers; also, none jumpers have full access to the park too.  As long as the 1 per trampoline rule is adhered to, the safety features seem to be good.

The timings on the jump were strict, so after exactly an hour, we were called to the gate to leave.  Most of them had not stopped for the full hour, so were happy to stop for a break.  There were a couple of toilet breaks during the jump; it was no issue to get in and out of the gate to access the toilets, they were small, but clean and not too far away from the action.

We went to Air Arena in Chichester over the Summer last year and I couldn’t help but compare the two centres.  The down side to Air Hop was the sectioning set up; the trampolines were in one area, the dodgeball in another, with the foam pit in a raised enclosure.  Whereas, Air Arena has a big open space with easy access to everything, so that the group felt less divided, this made it a lot easier to monitor as a parent.  Air Arena has a high wall to jump off into the foam pit, which was a huge success with the party goers, I felt that Air Hop was missing something like that.  The timings were much less strict, as soon as the safety briefing was finished, they were allowed into the park.  The safety briefing was both a video and a short chat from a team member, which seemed a bit more personal.  I found the staff at Air Arena to be really accommodating; extremely friendly and not in the least bit concerned about getting involved with the children, in fact, one of them spent most of the hour helping our group jump, as well as showing them tricks.  The girls were naturally enthralled by this young man’s antics. I didn’t try the food at Air Arena, so I can’t compare on that front.

Overall, I have to admit that Air Hope was a hit, despite my initial fears about safety.  The Friday evening special was amazing value; a brilliant way to spend a birthday evening.  I might book Air Arena if we do it again though, even though Chichester is a little further away.

(Disclaimer:  all the opinions in this article are my own.  I have not received any payment from either Air Arena or Air Hop).